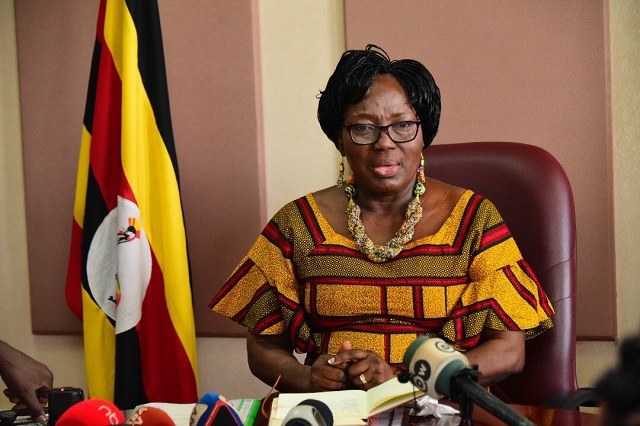 The Speaker, Rebecca Kadaga has urged more Ugandans to join savings and credit cooperative organizations (SACCOs) around the country and improve their livelihoods.
Kadaga said that the cooperatives have contributed to the wellbeing of many Ugandans calling for increased membership in the SACCOs.

The Speaker made the remarks while launching the Balyegera Kwiife SACCO based in Bupadhengo sub-county, Kamuli District on Friday, 04 January 2019.

Kadaga boosted the SACCO operations with shs2 million and two sewing machines which she said ought to help the members to earn a living and in turn support their families and the community at large.
“I know many women are engaged in tailoring so these machines will help them to serve the community and get money to support their families,” Kadaga said.

The Chairperson of the Baryegera Kwiife SACCO, Ali Mpasa, said that since its inception, several groups have been established through the organization which were building the community socio-economically.
“We have several associations that impact positively in our area including one for Boda-bodas, a farmers’ group, a women’s development group and a sports club for the youth,” Mpasa said.

He told the Speaker that their agricultural efforts had not yielded due to the harsh drought conditions and thus called on her support to the SACCO with agricultural inputs.

Kadaga on her part committed to engage Kasolwe Stock Farm in Kamuli district to provide quality seeds and other agricultural stock that can boost their farming operations.
“I know how tough the dry season has been; I will talk to the managers at Kasolwe to provide your SACCO with some seeds and animals that you can rear to boost your incomes,” said the Speaker.