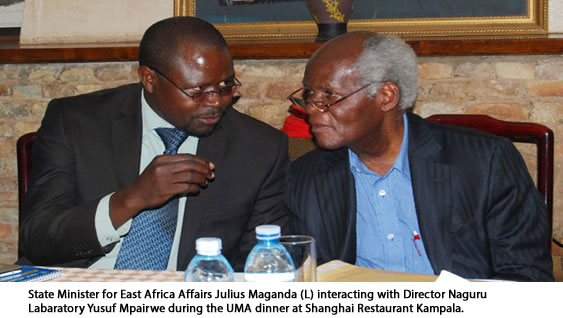 He said that this money will also be used as an emergency fund in case there arises a need that requires immediate action.

Medics under their umbrella organization, the Uganda Medical Association (UMA), have asked for sh20b to capitalize their Savings and Credit Co-operative Organization (SACCO).

Explaining why they need the money, the vice president UMA, Dr. Chris Oundo said that they want to make it possible for medics to access facilities such as car loans.

He said that this money will also be used as an emergency fund in case there arises a need that requires immediate action.

Speaking at a meeting held between the legislators and the medics at Shanghai restaurant in Nakasero, to deliberate of how best to tackle the issues of the health sector, Oundo said that the money will also be used to solve some of the problems facing the health personnel.

Niwagaba who is among the four legislators who were expelled from the National Resistance Movement Party in 2013 over misconduct, advised the medics to borrow a leaf from the teachers and resort to activism.

“You cannot have your SACCO registered into law but you can get the sh20b from government only if you act like teachers, if not you will not get the money. Government tends to respond to pressure,” he said.

He asked them to make their SACCO vibrant by employing medical personnel whose work is to only be activists and lobbyists who can make some noise and get heard.

However, Wandera advised the medics against activism since it contravenes their medical code of conduct.

“Deviate from activism to dialogue because activism will create hostility. Engage government through forums,” he said.
From: Newvision