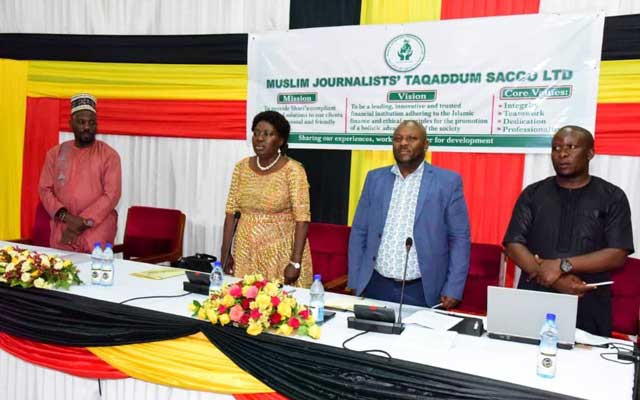 The Speaker of Parliament Rebecca Kadaga has advised Muslim journalists to increase savings and invest wisely so that their Savings and Credit Cooperative Organization-SACCO does not collapse.

Kadaga made the statement while launching the Muslim Journalists Taqaddum Cooperative Savings and Credit Society Ltd on Friday.

She advised the SACCO leaders and members to expand their investment portfolio to include earning profits from fixed deposit accounts and also buying shares on the stock market.

Kadaga however noted that several SACCOs have been formed, grown and died in a “very short time, and therefore, this one “should not be part of “the graveyard of dead SACCOS”.

SACCOs were introduced in 2006 as a mechanism for members to meet, save money and access loans so as to eliminate poverty. However, a number of them have collapsed in the recent past due to challenges relating to financial mismanagement, low saving volumes and high default rates among others.

The Chairman of the Muslim Journalists Taqaddum SACCO Kassim Kayira concurred with Kadaga on the need for prudent management of the SACCO. He added that apart from the general fear about poor management of SACCO, journalists are poor in mobilizing resources that benefit them.

Muslim journalists mooted the idea of the SACCO after forming a Whatsapp group which resulted into the members organizing and attending social gatherings and mobilizing resources to help vulnerable people in the community. It was from such engagements that the journalists agreed to form a SACCO, based on the principles of trust, honesty and the fear of God.

He noted that the SACCO was formed to improve welfare of journalists and also insure them against old age poverty.

Kayira says the SACCO currently has 60 fully paid up members who have saved a total of 32 million Shillings in one year. He says his leadership is now aiming to register at least 40 new members by June this year.

In 2019, the SACCO invested in supplying foodstuffs to schools and earned 4.1 million Shillings. It also injected  5.7 million Shillings in a car washing bay project located in Munyoyo, Kampala.

For one to join the SACCO, he or she must buy a minimum of 10 shares, equivalent to 200,000, Shillings, save a minimum of 50,000 Shillings per month and buy at least one share per month, until they have the maximum number of 163 shares per member.